The Sun is responsible for all life on Earth and most of our planet’s means of energy production depends on the Sun. We are told that without it we cannot survive, or at least told that we can’t survive for very long. My question is just that: how long would we survive?

Our thought experiment starts with an unphysical event. A demon or an evil genie (a la Descartes) makes our star instantly disappear. What happens next? Well, for the first 8 minutes 20 seconds nothing would happen from our perspective. That’s how long light and gravity takes to travel from the Sun to Earth. Its heat and influence would last for minutes before we realised what was happening.

It’s now 8 minutes 21 seconds. Panic sets in. Then we’d work out what happened, and then there would be even more panic. The Earth would continue on a straight line trajectory, from its orbit, moving at a speed of 30 kilometers per second into the cold unforgiving cosmos.

Without the Sun, the Earth would get cold. But how quickly would that happen? The Earth gets a whopping 173,000 Terawatts of power from the Sun, which is then almost completely re-emitted by the Earth. This relation is not direct, our planet doesn’t simply mirror the light out. The details of the light coming in and the heat coming out is described in the Earth’s energy budget. 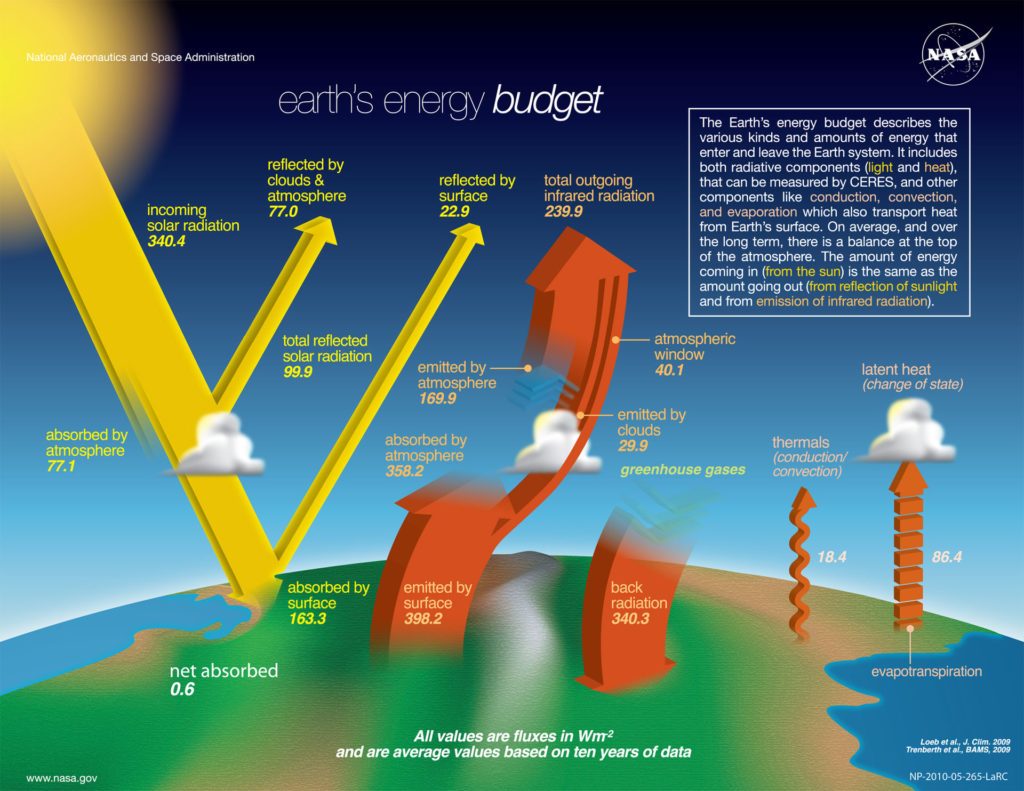 From this, we can work out that 120,000 Terawatts of energy are emitted by our planet as heat. This is a huge number. By comparison, human production of energy is equivalent to 18 Terawatts. The planet will just release more and more heat into the universe, through a process called radiative cooling.

We can do some simple back of the envelope calculations to work out how long it will take the Earth to cool down. We have the power, which is the energy per second it loses, so if we work out the energy content of the atmosphere and the oceans we might get a general idea of the future of our planet.

The atmosphere has an energy content of 5 x1021Joules/Kelvin while the oceans have over a thousand time that, with 5.6×1024 Joules/Kelvin. Dividing these numbers by the power, we get that our planet’s atmospheric temperature would roughly decrease by one degree every 12.96 hours. The oceans would take obviously a lot longer.

In these calculations, we assumed that both atmosphere and oceans are uniform and this is not true. We are also forgetting about the landmasses. Looking at the floor would actually feel warmer than looking at the stars. This simple calculation, while not exact, gives us a ballpark figure. It tells us that humanity’s demise would not be instantaneous. But it wouldn’t be a slow slog either. Likely within a year, it would be impossible to be outside. Everything would freeze, although the deeper ocean would remain liquid.

It’s important to realise how this theoretical catastrophe would affect different people differently. The fraction of human survivors would probably be slim. But it wouldn’t be zero, and that might continue for a few years.

People in regions accustomed to the cold, with houses with great insulation could continue to live for a long time. If they use geothermal energy such as in Iceland, they would have power and heat for a long time. They could use artificial lighting to grow plants. It would not be an ideal world, but better than freezing to death.

Could we fix the planet? Unlikely. We might want to increase the amount of greenhouse gases released into the atmosphere as soon as possible. That would trap heat, postponing the inevitable formation of the snowball Earth. It’s difficult to put an exact value on how long would this buy us, but every minute we could save might help us. The best option would be to move underground, protected from the elements and forget that there ever was life on the surface.

Why Does The Moon Go Red During An Eclipse?

What Would Happen If The Sun Disappeared ? – AGAIN!

Would I survive a nuclear attack on London by hiding under...

Snuffing Out Candles With Carbon Dioxide

Leaving The Universe Behind

Will Earth be sucked in by the Black Hole at the...